If That Ending Was Feminist, I’ll Eat My Own Heart.

But, as Velcoro might say, “This season can buttchug a hoarde of termites.”

I defended the first-season accusations of sexism because there seemed to be this overarching critique of masculinity and the possession/ownership of female bodies throughout the show. Sure, the female characters were wives or prostitutes, but there were conversations about how men try to control female bodies, and critiques of the men trying to control them. It was subtle and clever and poignant.

I thought I’d found a kindred spirit in Nic Pizzolatto.

But this season? Absolute failure. All the women are only defined by their men, be it whores or mothers. Even Bezzerides was introduced to us through sex (an unspoken kink so weird she freaked out her partner) and ends up a mother in the end. In between, she inhabited every bad detective/masculinity stereotype: hard-drinking, gambling, emotionally-unavailable. It was such poor character development that I wouldn’t be surprised that her character was male until two days before they began filming. And worse, in the first episode, her dad tells us that her entire personality is a reactionary construction against him. She’s literally not even herself. She’s anti-dad, laden with masculine clchés and then after she traumabonds, she gets turned into a mom.

A friend shared my thoughts and was insulted that she didn’t “get” how “feminist” this season was. If this season had been set in 1950, sure, it’s feminist because we let the women out of the domestic sphere. But in 2015? Every woman shouldn’t be defined by their desire (or lack there of) for sex or ability to make babies, which is ultimately what Pizzolatto did to his season two female characters. His female characters were essentially prostitutes or moms with nagging-wife syndrome. 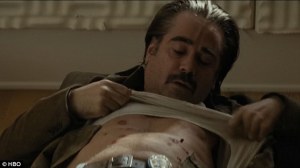 Jesus, Nic, you didn’t kill me, but I am fucking wounded.

I don’t think I’ve ever seen the quality of a show drop off so drastically in a single season. Pizzolatto managed to shoehorn every detective cliché in this season while keeping to the douchy stereotypes of poor writing. The plot was ridiculous and convoluted. They killed the gay guy while the two straight guys sent their women-folk off to safety while they died their pointless man-deaths. Human beings behaved in ways no human beings behave. It was a nightmare with brief moments of interest. I hope to see a supercut of this season. Could probably edit this monstrosity of saddest bars in the world with overly long how-sad-am-I-alcoholism closeups and helicopter tracking shots down to a solid two hours and even that couldn’t save this show from some of the dialog Vince Vaughn must have lost a bet to have to read.

I don’t even know what to say. I feel like I had a really fantastic first date dinner with Nic Pizzolatto and when we got back to his place, he bragged about how he stiffed the waitress on the tip. Everything from the first season I thought was a clever examination of masculinity and sexism was a lie? A fluke? Was Pizzolatto just @GuyInYourMFA all along?

Shit, Nic, give me a call. I will help you with this. Step one: no one says “filth.” Step two: women are more than the potential uses of their genitals. Step three: Profit.

Sure, I’ll watch season three, if Pizzolatto gets one, but it will be like my approach to most of season two: patiently waiting for it to subvert my expectations, but ultimately, watching only out of some misplaced sense of loyalty. That, and plain trainwreck rubbernecking.

Man, I need a drink.